In the state of Kerala in the colonial past when Monarchy was ruling the roost, there were occasions when a woman from the royal family had to run the kingdom either as the head or as the Regent when the royal legal heir was a minor. During their administration their gender never stood in the way and their talents were in full  flow and their  confidence and nuances of administration won them admiration and respect particularly in the corridors of power. Their reforms and  ability to put them into action right away  won the heart of the people. They approached the problems in the society with commonsense and social justice.  According to historian Manu S. Pillai, “The royal women of Travancore did whatever the men were afraid to do,”  It was the British who identified men as the leaders of the family, and the matriarchal system that prevailed in the state changed over to patriarchy. In the society dominated by men  Queen Parvati Bayi of the  Princely state of Travancore was one such a woman – a daring woman of wits and wisdom  who ruled the state with utmost  efficiency. 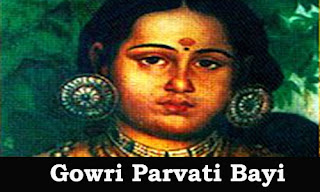 Above image:   Travancore Rani Gowri Parvathi Bayi (1802–1853): Succeeding her sister Maharani Gowri Lakshmi Bayi,  she was the Regent of the Indian state of Travancore in 1815-1829.  She finally  relinquished  her regency in favor of her nephew, Maharajah Swathi Thirunal.

Born to Princess Bharani Thirunal of the Travancore Royal Family in 1802, who was the Senior Rani of Attingal (the Maharanis of Travancore were styled as Ranis’ of Attingal). Rani Gowri Parvathi Bayi ascendency to the post of regent was purely accidental, Upon the unexpected death of her elder sister Maharani Gowri Lakshmi Bayi died after childbirth in 1815, as the only female child in the family (then 13 years of age), she became Regent Maharani on behalf of her nephew and legal heir Maharajah Swathi Thirunal Rama Varma.

Being committed and duty-bound as she was, she ran  the administration with skill, tactics  and discretion until the legal heir ascended  the throne. Her brother-law  Raja Raja Varma of the Changanssery Royal family  and her husband, Raghava Varma, of the Royal family of Kilimanoor were of great help during her critical  regency period. On the administrative side, she was assisted by Dewan Reddy Rao (1817 to 1821)who filled the post in the later period and earlier many dewans did not stay in office for a long time

The compassionate and talented, Maharani Parvati  Bayi was responsible for many reforms in the state such as :

01 Beginning of modern education in Travancore -with the issuance of  the Royal Rescript by Rani Gouri Parvati Bai in 1817. Universal education was not in force in many countries.

02. Christians were allowed to attend church services by not attending public work.

03. Lower castes people  of Travancore  were permitted to adorn themselves if wished  with gold jewelry.

05. Abolition of  Adiyara Panam   special licenses for the use of gold ornaments by higher caste people like Nairs, et al.

06. she abolished restrictions on the usage of houses such as Nallukattu, etc that were used by caste Hindus like Nairs after paying taxes – Adiyara  Panam. Ettukattu houses were heavily levied. Such taxes were done away with during her reign.

07.Givig importance to higher education for the youths, college education was introduced for the first time in Travancore.

08. She made vaccination more popular as part of health care introduced by  her sister Maharani Gowri Lakshmi Bayi.

10.  She in 1823 she took an important decision and freed the women from mandatory obligation of  bearing torches during state procession, a degenerating task and she restored their dignity. Two decades later  in England  Lord Ashley passed an Act  and freed women there from disgusting  obligations such as working bare-chested in coal mines etc.

When the legal heir became legally major in 1829 Maharajah Swathi Swathi Thirunal was crowned King in 1829. Maharani who led a peaceful life after the end of her regency  died in 1853.